Performing Heritage / Who we are

We have reason to think that Heritage is something we all make together. It is the outcome of the complex interaction of potentially everyone in a community, through all of his or her manifold identities – parent, worker, church-goer, researcher, football fan.

Identities are themselves something we negotiate and adapt to contexts. It is a game we all play in any human interaction where our symbolic or concrete thriving or misfortune is at stake.

If we think of Heritage as a collective performance taking place in real or virtual contexts, we think of an endless transactional turmoil where values are continuously assessed for ourselves and others. We actually follow and perform patterns that we have found, and change them little by little in the very negotiation. According to such vision, I belong to what I do. I am ‘what’ and ‘how’ I do.

This is a relatively new point of view in Europe. Some sibling approaches had seen the light in the creole Caribbean or Australia, where there’s nothing such as ‘Heritage’.

Over there, the encounter of mutually unknown identities sparkled the process on how we build a common ground out of diversity, or how we fail to do so. These encounters generate unintended outcomes, a phenomenon we have called Creolisation.

Today Europe, a continent of incredible cultural variety, is itself a venue of clashes and encounters with new people from all over the world. The Heritage of Europe, in all its tangible and intangible aspects, will change meaning forever because its ‘players’ are changing for good.

With its University as a main partner, the group started a series of international partnerships that gave rise to a cluster of European projects which features actions under the Creative Europe, Horizon 2020, Culture 2007-2013, Erasmus IP Programmes and Europe for Citizens programmes.

The first step of this cluster of projects took place in 2009, when we kicked-off ‘Playing Identities: Migration, Creolisation, and Creation’ (Culture 2007-2013 programme), which involved six European countries. The project also issued an international call for artists.

Back then, we adopted the twofold approach that still watermarks our projects: academic work and artistic endeavour intertwine our research, and then deliver in their own respective fields.

Migration and Creation were the two main points of focus of the first Playing Identities. In order to test contents and methodological approaches, we produced two theatrical plays: Slawomir Mrozek’s Emigrants directed by Jerzy Stuhr, and the first Creole Performance Cycle entitled ‘L’Ala’, a five-phase performance led in the partner countries directed by Balletto Civile, which inquired into Work as a forger of personal identity.

On the academic side, the book Shifting Borders collects our academic outcome on Creolisation, switching Edouard Glissant’s poetic intuition into an operative concept. We met with Mr. Glissant a few months before his demise, and he drew this for us as a wish for good luck.

Playing Identities proved to be a seminal project. It contributed to the rise of Landscape Choreography (Culture 2007-2013 Programme), and to the line of research that still holds today. Indeed, it was clear to us that performativity was the key to understand the relational import of Identity and Heritage. We needed a toolbox for the performer.

Therefore, in years 2012-2014 we kicked-off the Erasmus IP Programme ‘Playing Identities: Acting, the Self, and Society’, in cooperation with a growing number of European Drama Academies and universities. More than 90 prospective actors and directors and more than 20 scholars and professional practitioners developed a discourse on the social role and cultural duty of the actor. We intertwined theatrical traditions, discussed implicit cultural and artistic tenets, and thought of acting as an art of relations, and as an example of embodied knowledge that needs to be inherited from generation to generation.

On the other hand, we felt the need to focus on Heritage-making for thinking an inclusive space for debate, reflection, and action-planning on common values, history, culture and democracy as cornerstones of the still-to-make European Citizenship.

In year 2012, under the Europe for Citizens programme, we developed the project ‘Innovating Heritage: Developing New Practices and Tools of Participatory Democracy in Europe’ (INHERIT). Through the PanSpeech crowdsourcing platform, we fostered interactions about cultural and environmental Heritage among scholars, citizens, activists, with the aim to foster active citizenship through bottom-up content creation, intercultural and intergenerational dialogue, and the design of tools for European policy makers on the local, national, and Pan-European levels.

Heritage as an eminently performative, and iterative process was then scrutinised under four perspectives – Inheritance (its passover), “Heimat” (Belonging to a Homeland), Innovation (impact of ICT and Digital Media), and Privatisation (gentrification and private exploitation).

In July 2014 PanSpeech became a creative company devoted to linking and deploying academic and artistic research to society.

While insisting on meshing theatrical traditions, we kicked off a new version of the Creole Performance Cycle with four young directors, a 18-month Audience Engagement and co-creation process in every partner country. The Creole Performance Cycle uses crowdsourcing as a strategy for engaging European audiences on societal changes and the inner workings of the contemporary man. The collective artistic work reveals the state of the art of European identity, belonging and cultural heritage, and foster processes in which citizens, as the owners of heritage, become both performers of heritage and audience in the very artistic endeavour.

At this point in time, our Performing Heritage approach has developed a portfolio of experiences and practices ready to be shifted on large-scale contexts and intergenerational events. By seeing Heritage as performative patterns we can have a practical description of causes, but also envisage normative and narrative strategies for the empowerment of communities in very specific circumstances.

In our last project, ‘Living with Industrial Disasters and risk’ (LID), still under development, we will focus on communities stricken by industrial disasters and will promote a new narrative based on artistic approaches and languages, as well as an innovative perspective on what uncertainty means for citizens and their territories. Industrial Disasters are a worthy workfield for Performing Heritage as the human decision-making process is a relevant factor in the chain of events. Indeed, populations are overlooked in decisional processes first, and then abandoned to the aftermath of poor choices. LID will create an open Digital Public Space platform, in order to enable citizens and communities living with the consequences of industrial disaster to become autonomous, articulate and effective campaigners in their own causes and will also offer innovative approaches to technology co-design and participatory research methodologies. 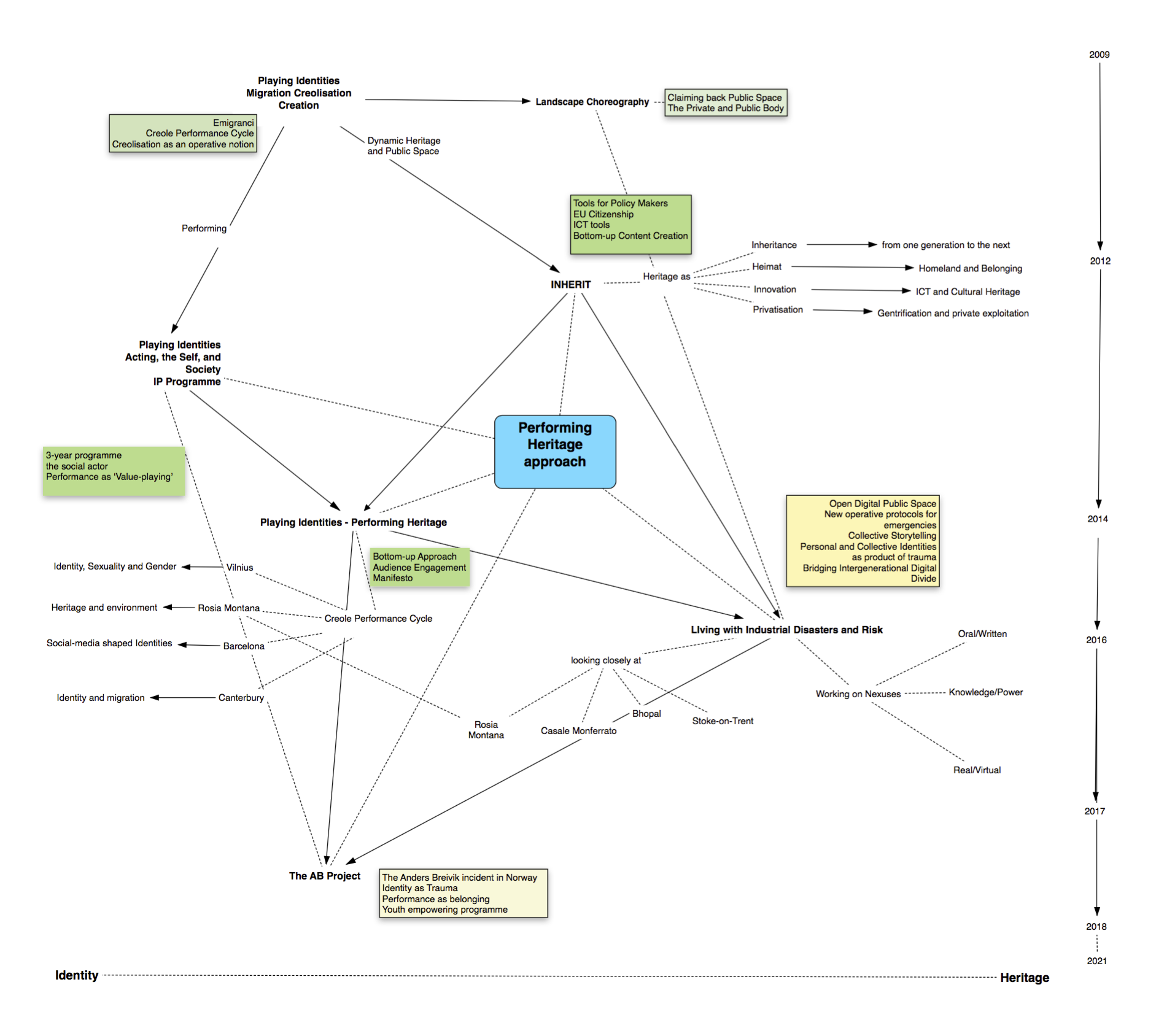 This project has been funded with support from the European Commission. This publication reflects the views only of the author, and the Commission cannot be held responsible for any use which may be made of the information contained therein.
© 2016 Performing Heritage • P.Iva 01387700527 | Cookie Policy